Skip to content
By: Stella AnzenyPosted on August 31, 2020
A crowd watch a performance at the Wuhan Maya Beach Park on Aug 15. REUTERS

With foreign vacations off limits, China is in the middle of a theme-park boom as domestic tourists seek amusements in their own backyards.

In Wuhan, the epicenter of the initial Covid-19 outbreak, thousands of people packed the Maya Playa Water Park in mid-August for a pool party, banishing memories of the 76 days the city had spent under strict lockdown until early April.

To sustain that uncorked enthusiasm, entry to the water park is free until the end of 2020 as Maya Playa, like many other Chinese parks, seeks to capitalize on the foreign-travel freeze by offering deals to drive up visitor numbers. (The park generates revenue from food, souvenirs and other items.)

At Colorful Yunnan Paradise in Kunming, the capital of Yunnan province, the ferris wheel is decorated with a vast neon peacock, a traditional symbol in Yunnan. One recent day the mostly college-age visitors shrieked as they corkscrewed past the outstretched talons of a giant sculpted eagle while riding the Broad-Winged Snow Eagle Roller Coaster.

Some park visitors said that without coronavirus-related travel restrictions they might never have come.

Rachel Zhang, a 25-year-old Kunming native who previously traveled to Disney’s resorts in Hong Kong and Shanghai, opted for a local excursion this summer.

“I didn’t have great expectations for this park,” Ms. Zhang said. “But I have to say I was impressed.”

Amusement parks have a checkered history in China. In addition to the larger parks, the country is dotted with hundreds, if not thousands, of local attractions of varying quality and scope.

Travelers to the country’s northwest desert can, for instance, make a side trip to C-Space Project Mars, a recreation of the Martian surface. In Yunnan, a smaller local “attraction” is the Kingdom of Little People, where visitors can tour a miniature realm populated by dwarfs.

Two years ago, authorities intervened to cool the overheating industry, but parks have nonetheless continued to sprout across the country as developers tap middle-class consumers’ rising demand for local leisure experiences.

There are now around 160 large-scale theme parks operating in China, triple the number of a decade ago, according to U.S. engineering firm Aecom, which advises theme-park developers. Well-known U.S. brands, from ViacomCBS Inc.’s Nickelodeon to Comcast Corp.’s Universal Parks & Resorts, are piling in alongside local operators.

But for some regional parks, which rarely exceeded half their capacity before the coronavirus, the international travel shutdown appears to be boosting attendance, as people seek diversions closer to home.

As of August, domestic tourism in China nearly recovered to pre-Covid-19 levels. For many parks, the question is whether the effect will last once global travel resumes.

Making money has long been a challenge for parks located outside of China’s biggest cities. According to people in the industry, about a third of China’s 160 major theme parks make a steady profit. And with up to 60 more parks due for completion by 2024–including the $6.5 billion Universal Studios Beijing scheduled to open next May–competition will intensify.

“There are a lot of failed theme parks,” said Chris Yoshii, a vice president at Aecom. “There is still demand–but for better-quality parks.”

Colorful Yunnan Paradise is the first big theme park in Kunming, a city of six million people. Opened two years ago, it drew over two million visitors in its first 14 months of operation. That is relatively modest compared with the country’s top theme-park venues, Chimelong Ocean Kingdom in Guangzhou, which had 11.7 million visitors last year, and Shanghai Disney, with 11.2 million. 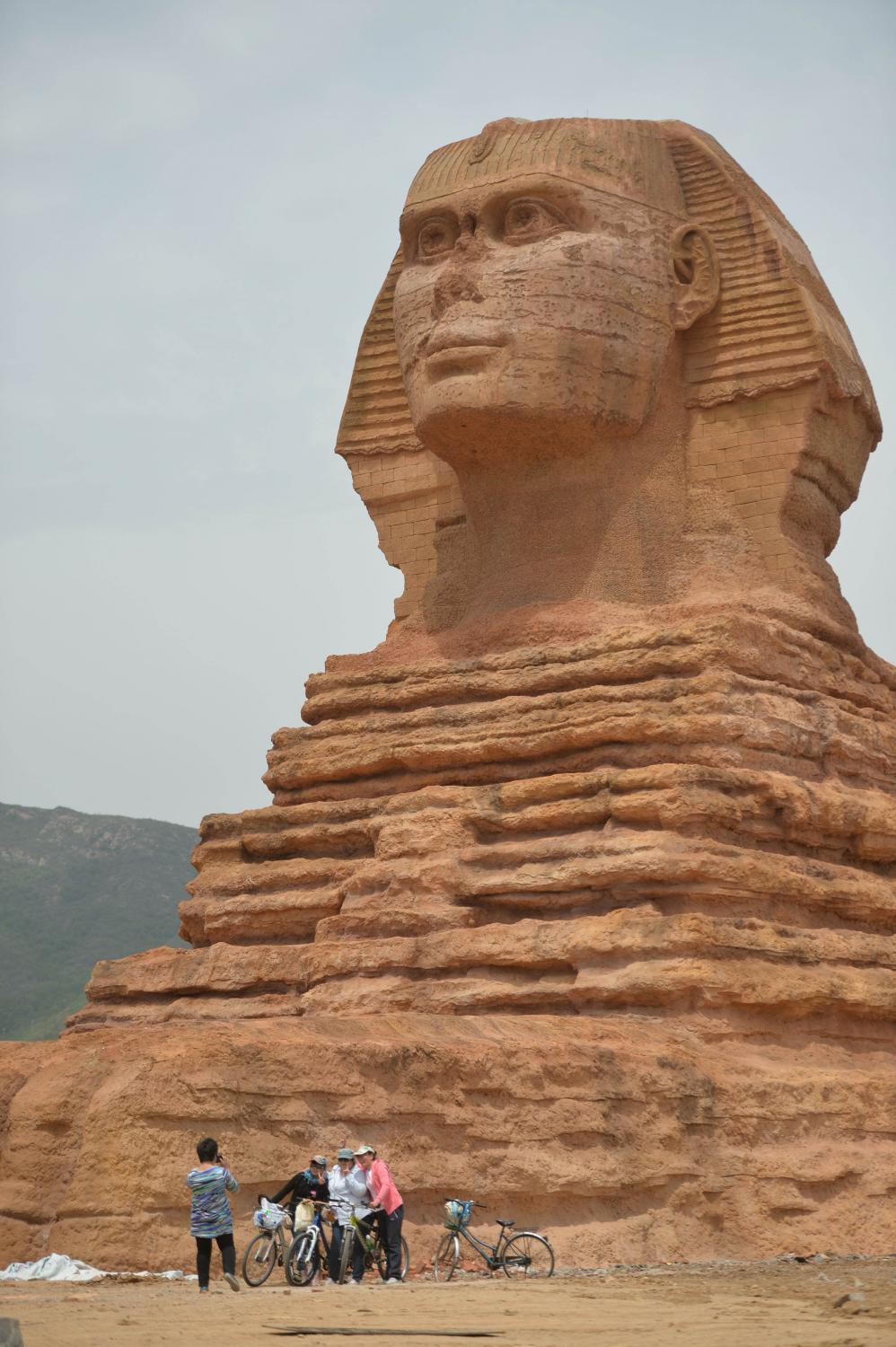 Some of China’s more colorful amusement parks include an Egypt-themed destination with a reproduction of the Sphinx in central Hebei province that sparked a 2016 complaint from Cairo. AFP

And soon there could be trouble in Paradise. As the local government develops Kunming into a regional tourist hub, eight more theme parks are due to open over the next few years, including the first Paramount Pictures park in China and Evergrande Fairyland, a $4.6 billion development being undertaken by real estate giant Evergrande Group.

Kunming’s culture and tourism bureau declined to answer questions about what it said were ongoing projects.

China can absorb more parks, said Mr. Yoshii: The annual rate of theme-park visits per capita is around 0.16, a quarter of the U.S.’s level. “But, there is going to be a shakeout–those that don’t deliver a great experience won’t survive.”

Some of China’s more colorful amusement parks include a marine-themed venue featuring a life-size replica of the Titanic in landlocked Sichuan province, and an Egypt-themed destination with a reproduction of the Sphinx in central Hebei province that sparked a 2016 complaint from Cairo.

Two years ago the authorities, while still broadly supportive of theme parks as a way to boost domestic consumption, banned the practice of developing parks as a way of accessing land for residential property development. The tactic had produced a spate of misconceived venues built in unsuitable locations by indifferent operators.

Even so, the rate of development has barely slowed, and many local governments still want theme parks to put their cities on the tourism map.

Amidst the swarm of local operators readying new venues, Nickelodeon, which like Paramount is part of ViacomCBS, is due to open its first China theme park in the western megacity of Chongqing this December. Last year, Lions Gate Entertainment Corp. opened a movie-themed park in the southern city of Zhuhai.

The boom has eluded some. Six Flags Entertainment Corp. intended to open up to 11 Chinese parks starting this year, but those ambitions died when its local partner ran into financial difficulties. Six Flags didn’t respond to questions. In a recent earnings call, Chief Financial Officer Sandeep Reddy partly attributed a revenue slump in the June quarter to “the termination of the company’s international contracts in China.”

Even Wanda Group, one of China’s biggest real-estate developers, struggled to make inroads, unloading its parks in 2018 after failing, as promised, to crush Disney with its localized offerings.

Still, the boom has meant a bonanza for builders of theme parks, which can cost $100 million to several billion dollars to construct. Canadian company WhiteWater West, one of the world’s largest water-park developers, now does roughly half of its global business in China, according to Asia Chief Operating Officer Phil Zhong. State-run Overseas Chinese Town Enterprises Co., the country’s biggest theme-park operator and a longstanding WhiteWater West client, alone has at least 30 new water parks in the pipeline, Mr. Zhong said.

And there is untapped potential in megacities like Shanghai, which has one water park but could accommodate at least two more, he said.