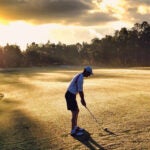 The National Golf Foundation reports an uptick in solo rounds in 2020.

Since the start of the coronavirus pandemic, do you feel like you’ve been playing more rounds of golf by yourself? If so, you’re not alone.

Well, technically you are alone — alone on the golf course, that is. But you’re hardly the only one with a shifting golf schedule.

According to the National Golf Foundation, “core golfers” are playing solo more often these days. Last year, 31 percent of that group reported playing solo at least once. In 2020, that number has leapt to 43 percent and could presumably continue to rise. So what explains the jump? Here are a few hypotheses:

For starters, some golfers may still be reluctant to get in close contact with other people from outside their household. While there are plenty of ways to ensure that you maintain social distance during rounds of golf with others, it’s hard to find a more socially distant recreational activity than a solo round of golf.

Moreover, some states put rules into place early on in their reopening process mandating that group sizes stay small and that sharing a golf cart with someone from outside your household was against the rules. No doubt some golfers played by themselves because there was no obvious alternative.

Massive increases in working from home is generally good news for the avid golfer. No commuting means plenty more time to get out on the course, and even though people are apparently working more hours (according to this study) they’re also more in charge of their schedules. Anecdotally, I’ve heard of plenty of golfers who try to finish up their meetings by 4 p.m. so they can sneak off for an evening round. The data supports that theory, too; nine-hole rounds (“emergency nines,” as the NGF says) are up 15 percent year over year, suggesting an uptick in sneak-outs.

Worth considering the next time you’re tempted to schedule that 4:30 p.m. Zoom call.

Businesses across the United States have reopened in recent months, but often with important modifications. This is especially true for recreation and/or entertainment — you can’t really go to a bar or to the movies, for example, the way you could pre-pandemic. But when it comes to golf courses, the experience is largely unchanged. Yeah, you’ll likely spend less time in the clubhouse or the pro shop, and you’ll need to bring your mask, but besides that? The essence is the same.

The NGF continues to report that more than 98 percent of golf courses are open, which correlates with the rise in solo rounds (and rounds in general, which have reportedly been up significantly since mid-May). In addition to all the positives associated with playing golf, there are also fewer alternatives.

4. Playing golf by yourself is the best

This one’s a bit more subjective, but here goes: There are plenty of benefits to flying solo off that first tee. (I wrote about my own experience here.) It’s a great spot to clear your head, especially if you’re been crammed into a house or apartment with roommates or family members all working from home. Fresh air is vitally important. Taking some time for yourself is good for everyone around you. And it’s the best way to practice, too, and improve your game!

So get on out there and remember that even if you show up to the course by yourself, you’re anything but alone.

Dylan Dethier is a senior writer for GOLF Magazine/GOLF.com, where he’s told the story of a strange cave in Mexico, a U.S. Open qualifier in Alaska and plenty in between. Dethier joined GOLF in 2017 after two years scuffling on the mini-tours. He is a Williamstown, Mass., native and a 2014 graduate of Williams College, where he majored in English. Dethier is the author of 18 in America, which details the year he spent as an 18-year-old living from his car and playing a round of golf in every state.