The Trump administration is detaining immigrant children as young as one in hotels, sometimes for weeks, before deporting them to their home countries under policies that have effectively shut down the nation’s asylum system during the coronavirus pandemic, according to documents obtained by The Associated Press.

A private contractor for United States Immigration and Customs Enforcement (ICE) is taking children to three Hampton Inn & Suites hotels in Arizona and at the Texas-Mexico border, where they are typically detained for several days, the records show. The hotels have been used nearly 200 times, while more than 10,000 beds for children sit empty at government shelters.

Federal anti-trafficking laws and a two-decade-old court settlement that governs the treatment of migrant children require that most kids be sent to the shelters for eventual placement with family sponsors. But President Donald Trump’s administration is now immediately expelling people seeking asylum in the US, relying on a public health declaration to set aside those rules.

A representative from the Texas Civil Rights Project confirmed to Al Jazeera the accuracy of the claims and that a lawyer with the organisation has visited a hotel where children were being held. 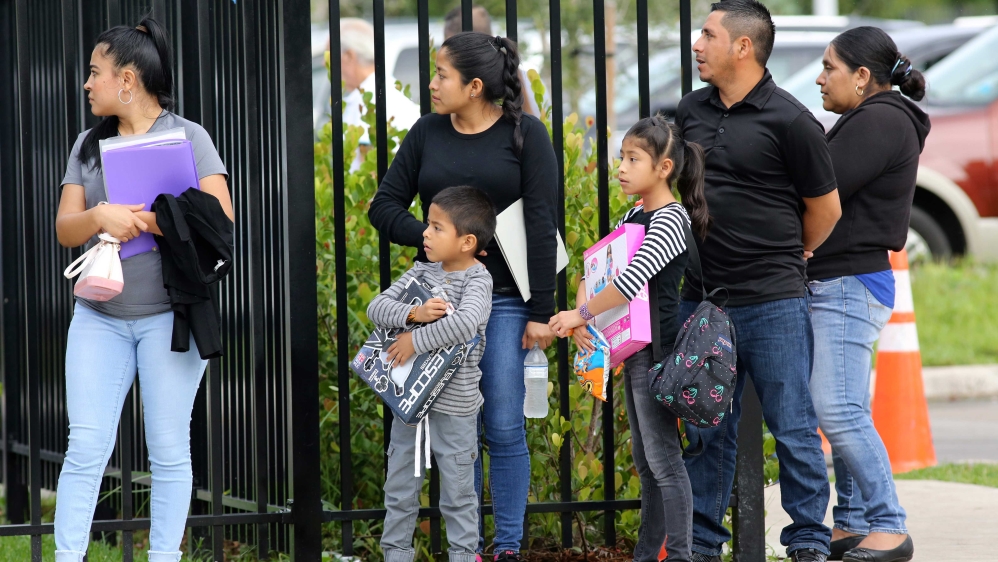 People waiting in line for their appointment at the Miramar Immigration and Customs facility, in Miramar, Florida [AP Photo/Lynne Sladky]

Lawyers and advocates said housing unaccompanied migrant children in hotels exposes them to the risk of trauma as they’re detained in places not designed to hold them and cared for by contractors with unclear credentials. They are challenging the use of hotels as detention spaces under the Flores court settlement.

“They’ve created a shadow system in which there’s no accountability for expelling very young children,” said Leecia Welch, a lawyer at the nonprofit National Center for Youth Law. “There really aren’t enough words to describe what a disgraceful example of sacrificing children this is to advance heartless immigration policies.”

ICE largely declined to answer questions but referred to the contractors as “transportation specialists” who are “non-law enforcement staff members trained to work with minors and to ensure that all aspects of the transport or stay are compliant” with the court settlement. It would not say whether they’re licensed child care professionals or have received FBI background checks.

In McAllen, Texas, people in scrubs went room to room on the fourth and fifth floors of the Hampton Inn caring for children, according to Roberto Lopez of the nonprofit Texas Civil Rights Project. He walked through the hotel Friday, spotting a small child holding on to a gate in a doorway as an adult on the other side played with him. Lopez said he could hear the cries of at least one child in the hallway.

Parked outside were unmarked white vans with the silhouettes of adults and children visible through the windows, Lopez said. He did not see logos or insignia for any government agencies on the vans or in the hotel.

The records obtained by AP show the Hampton Inn in McAllen was used most often to detain children – 123 times in two months. The other hotels are in Phoenix and El Paso.

Hilton, which owns the Hampton Inn brand, said in a statement Tuesday that all three hotels were franchises and it believed rooms were booked directly with those owners. Hilton would not say how many rooms had been used to detain children or how much the rooms cost.

“We understand these properties have been used for their intended purpose – temporary accommodation for guests traveling between locations,” the statement said.

Castle Hospitality, which operates the McAllen hotel, said it did not know its rooms would be used to detain children until they arrived.

“We are not making any political statements one way or the other by taking in this group and we feel that anyone, especially children in such difficult circumstances, is entitled to safe and clean accommodations and that’s what we aim to provide,” a company statement said. “In our conversations with the group contact, we have been assured that all state and federal regulations are being followed.” 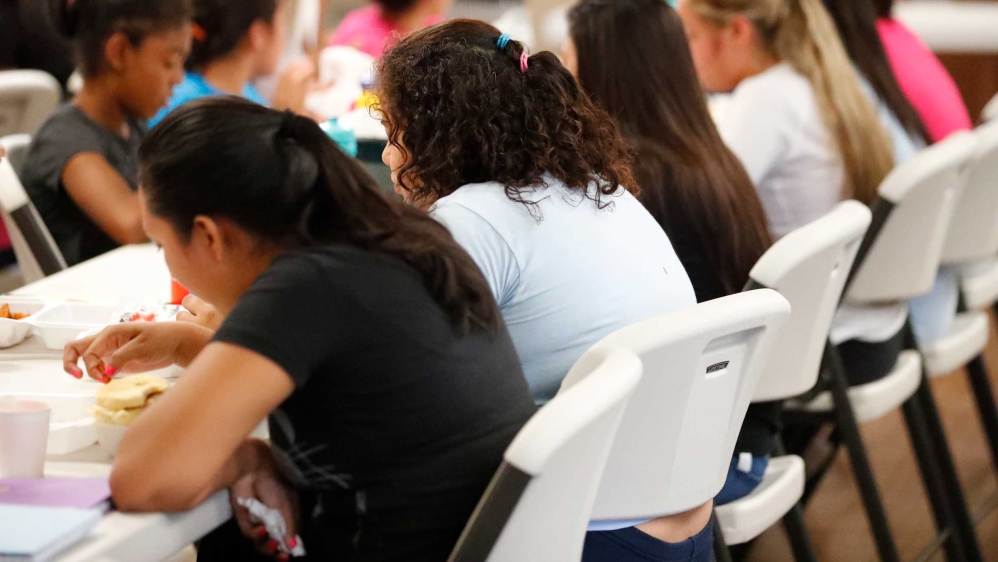 At least 2,000 children have been expelled since March, when the Trump administration announced it would broadly refuse entry to people seeking protection in the US. The administration has cited the threat of the coronavirus in saying it does not have the resources to allow migrants to stay.

The US has the highest number of confirmed COVID-19 cases and deaths in the world, and the virus is ravaging much of the West and South, including Texas’s Rio Grande Valley, where McAllen is located.

Before March, Central American children who crossed into the US alone were generally sent to facilities overseen by the Department of Health and Human Services. HHS facilities have bedrooms and schooling, and children are given access to lawyers and generally placed with family sponsors. The facilities also are licensed by the states where they are located. Federal anti-trafficking law requires the government to promptly refer most children to HHS.

While US Customs and Border Protection said it made 1,564 apprehensions of unaccompanied children at the southern border in June, HHS said it received just 61. CBP would not say how many children are expelled right away, how many are sent to hotels or how border agents decide between those options or referral to HHS. The agency referred questions about hotels to ICE.

ICE said it uses contractor MVM Inc “to transport single minors to hotels and to ensure each minor remains safe and secure while in this temporary housing.” MVM had a contract with ICE for “transportation services” extended for $49m on March 31, according to federal contracting data. The company declined to answer questions.

According to MVM’s hiring website, it is looking for “bilingual travel youth care workers” based in Phoenix and McAllen to provide “humble care and service to unaccompanied children and teens”. The posting does not require a child care background but said selected applicants wiould be given a “government background investigation”.

The border agencies and MVM have been criticised for their treatment of immigrant children during the Trump administration, including wide-scale family separations in 2018 and the detention of children in squalid border stations in Texas last year.

The government provided records on the detention of children and teenagers expelled in April and June to a team of lawyers representing the interests of immigrant children under the Flores agreement, reached in 1997. Records for May were not available.

The Hampton Inns in McAllen, El Paso and Phoenix were used 186 times. No other hotels appear in the records, which indicate that 169 children were detained at the hotels, some with multiple stays.

The records indicate the children were not accompanied by a parent but did not say more about the circumstances of their crossing the border. In the past, some very young children have been brought by older siblings or other relatives. Others have been sent by parents waiting for their court dates in refugee camps on the US-Mexico border with hopes they will be placed with relatives.

Karla Vargas, a Texas Civil Rights Project lawyer, represented a 13-year-old girl who was detained in a hotel and later expelled to El Salvador. Vargas said border agents did not tell the girl’s mother in the US that they had detained her daughter. A person who crossed the border with the girl called her mother.

“The children with whom we’ve spoken say there are other children in the hotels,” Vargas said. “We know that there are masses of children.”