Welcome back to the second article in a four-part series celebrating the original lands of Disney California Adventure Park. As an opening cast member, it’s still hard to fathom that DCA will turn 20 years in February of next year. If you missed the first article, check it out here to read about Entry Plaza and Sunshine Plaza. The consensus from readers is that we all miss those CALIFORNIA letters.

Now, it’s on to Part Two, where we’ll take a limo ride through Hollywood, or at least Disney California Adventure’s version of Tinseltown. Along the way, we’ll see a few familiar Muppet faces, some celebrity soap stars and visit Hyperion Theater before Disney’s Aladdin: A Musical Spectacular began an unprecedented 13-year run.

Welcome to Hollywood! Tinseltown! H-wood! You get the idea. But instead of just driving north an hour from Anaheim to visit the famed Hollywood and Vine, in Disney California Adventure you stepped inside a replicated studio backlot. Set east of Sunshine Plaza, you entered through an elaborate walkway, flanked by two large, gold-tone elephants. These pachyderm sentinels were an homage to old Hollywood replicating a set design from Intolerance (1916).

Once inside, you followed Hollywood Boulevard to a large backdrop depicting a forced perspective of Hollywood. The illusion was such that you looked down the streets of Hollywood under the bright, azure California sky. To the right of the backdrop was the entrance to Hyperion Theater. To the left, were large sound stages, an outdoor stage and commissary hiding food locations and attractions. 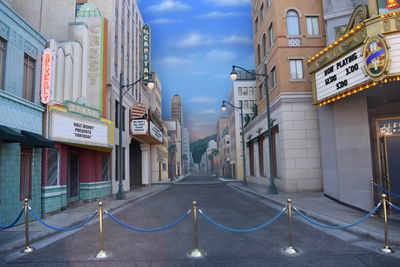 The Hollywood backdrop is one of the most photographed and Instagrammed locations inside Disney California Adventure Park. Photo by Lisa Stiglic.

Hollywood Boulevard was aligned with shops including merchandise, a few restaurants and The Disney Animation Building. Some shops were just facades with terrific puns–Dial “M” for Muscle (gym), Ben Hair (salon), and La Brea Carpets (carpets)–but there were four original shops in Hollywood Pictures Backlot. 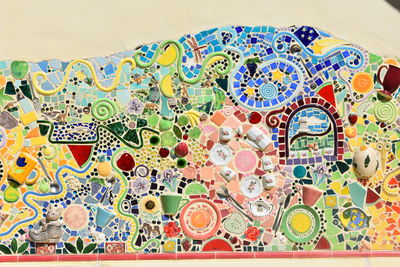 The tile work is adorned with ordinary, every day items including marbles and flatware. Next time you visit, try to find the dinosaurs or Statue of Liberty Mickey! Photo by Lisa Stiglic.

Lack of attractions was one of the common concerns in the early days of DCA. Hollywood Pictures Backlot was probably the most notable, especially considering it housed what has been deemed the worst attraction ever at any theme park. Read on. 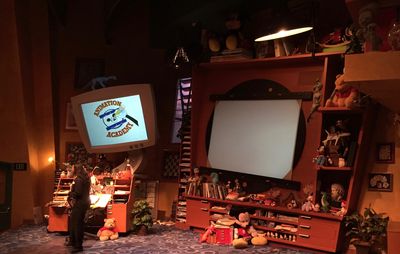 The Animation Academy has gained a following from opening day. In addition to drawing your favorite characters, the rotation now includes holiday-themed characters like Vampire Mickey and Jack Skellington. Photo by Megan Walker.

Hollywood is billed as the entertainment capital of the world so, of course, Hollywood Pictures Backlot had plenty of entertainment on both small and large scales.

Almost 20 years later, Hollywood Pictures Backlot is now Hollywood Land. A handful of the original locations remain intact but many have undergone transformations. The once-popular ABC Soap Opera Bistro is now Disney Junior Dance Party!, Super Star Limo drove out of sight to make way for Monsters, Inc.: Mike and Sulley to the Rescue!, and Elsa and Anna reign in Hyperion Theater. And, if you look close enough, you may even spot a Spiderman now and then. If you’d like to learn more in-depth details about Disney California Adventure’s first two decades and more about Hollywood Pictures Backlot, please check out my book California Dreamin’: Disney California Adventure: An Insider’s Journey.

I’ll be back next month to discover the wonders of The Golden State. Hint: “Nice work, Pal” became a catchphrase on this popular attraction.